If you use these audios, please support their development. Just $1 for each audio you use could greatly help with creating more audios!

Excellence vs. Perfection
by Monica A. Frank, Ph.D.

Some people may be curious as to why this website is dedicated to the "pursuit of excellence" when I am constantly warning about the dangers of perfectionism. To address this question we must differentiate between the pursuit of excellence and the need to be perfect. These concepts are not only different but can be considered antagonistic to one another. In fact these concepts are so opposed to one another that excellence can best be attained by giving up the demands of perfection. 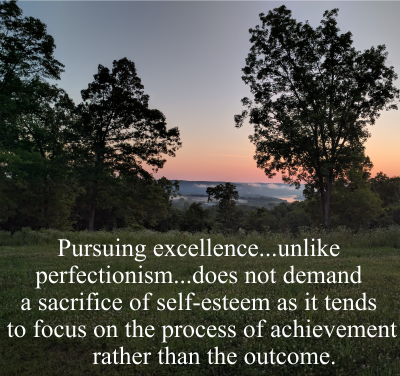 Perfectionism is the individual's belief that he or she must be perfect to be acceptable. Perfectionism is black and white with no gray area. Anything other than perfect is failure. Perfectionism is an attitude, not necessarily a behavior. In other words, two people can engage in the same behavior such as trying to win an Olympic gold medal but one can be pursuing excellence and the other is demanding perfection. The difference lies in the thought process about the goal or behavior, not in the goal or behavior itself.

What is the pursuit of excellence?

The pursuit of excellence is the desire to attain a goal of excellence, to achieve at a high level, to be the best that one can be but without the demand attached to the goal or desire. Pursuing excellence may require tremendous effort and focus as well as other resources. But, unlike perfectionism, it does not demand a sacrifice of self-esteem as it tends to focus on the process of achievement rather than the outcome.

How does the pursuit of excellence differ from the demand of perfection?

1) Process-oriented vs. Outcome-oriented. The pursuer of excellence focuses on the process of the task at hand rather than the outcome. As a result, goals typically are performance-based rather than achievement based. For example, in a relationship situation a person may develop a performance goal of "I will make the effort to listen to my spouse more" rather than the achievement goal of "I will stop interrupting my spouse." The performance goal is more achievable because it is always easier to add a new behavior than to stop an existing behavior. However, as you may see with this example, if an individual focuses on listening to their spouse more, they are likely to reduce how much they interrupt their spouse. Yet, setting an outcome-oriented goal of stopping a behavior is likely to lead to more failure and discouragement and possibly giving up.

2) Valuing Self vs. Valuing Achievement. For a perfectionistic individual self-worth depends upon achievement. Given that the achievement goal is perfection which is impossible to achieve, the individual is likely to perceive him or herself as worthless or a failure due to not achieving perfection. However, the pursuer of excellence values him or herself separate from the achievement based upon the effort or the willingness to try rather than whether the goal was achieved. For instance, a perfectionist trying to lose weight may think "I gained weight this week. I can't do this because I'm so weak and lazy" whereas the pursuer of excellence may think "I gained weight this week. I gave it a good effort and I need to figure out how to improve" and is unlikely to negatively label him or herself.

3) Achievable Goals vs. Unreasonable Demands. The pursuer of excellence sets realistic but challenging goals that are clear and specific whereas the perfectionist set unreasonable demands or expectations. I see many women who believe that no matter what is asked of them they should meet everyone else's needs which leads to the stress of not enough time to do everything they believe they should. Therefore, if the demand exceeds the available time it is unreasonable. The pursuer of excellence would examine the situation and make decisions about what is most important to do, where they can set limits by saying "no," and when they can delegate.

4) Assessing Mistakes vs. Criticizing Failure. The perfectionist criticizes him or herself for failure and mistakes often very harshly: "I'm so lazy and stupid." I often confront this self-flagellation with "Would you say that to someone you love? Then, don't say it to yourself." However, the pursuer of excellence is willing to examine his or her performance and personal vulnerabilities so as to improve. Yet, this examination is conducted in a gentle way without harsh labels or comments.

5) Internal Satisfaction vs. External Recognition. The pursuer of excellence focuses on achieving goals to attain personal satisfaction rather than needing others to recognize their success. The perfectionist can only feel good about him or herself when others recognize the achievement. In fact, the perfectionist may be unable to accomplish tasks or goals that don't involve external recognition. For instance, a person who can't achieve sales goals when working for him or herself but is able to achieve the goals set by a supervisor.

6) Risking Failure vs. Avoiding Failure. The pursuer of excellence desires to risk failure because of the benefits that occur from taking a risk. He or she is able to do this because failure isn't personalized and dreaded as a result. However, the perfectionist prefers to avoid failure and therefore often performs at a lower level than he or she is capable. They will often report "I know I'm capable of more. I'm just afraid to try." Their need to avoid failure is due to the high cost of failure to their self-esteem: "If I fail, I am a miserable failure." Whereas, the pursuer of excellence believes "I was willing to take a risk and try something that most people aren't even willing to try. So, no matter what the outcome is, I feel successful because I challenged myself."

7) Partners vs. Adversaries. The pursuer of excellence sees others as partners in the achievement of their goals. They view advice as constructive criticism and seek it out. Whereas, the perfectionist views others as potential critics and fear blame from others. As a result, they avoid feedback and their world tends to be viewed more competitively and adversarial which then reinforces the view of danger from others. For instance, if someone states, "I think if you took this stance when swinging the club you could hit it farther" they would see the statement as criticism saying that they can't play golf whereas the pursuer of excellence would welcome the suggestion and act upon it.

8) Patience vs. Demand. The perfectionist expects goals to be achieved immediately. I frequently encounter clients who express discouragement at about the third therapy session, "I just can't get this. I can't stop the negative self-talk." They believe that if they identify a problem, they should be able to solve it immediately. Whereas the pursuer of excellence recognizes that change occurs with consistent effort over time and have the patience to continuing pursuing goals even when there is not immediate change.

9) Desire vs. Fixed Desire. A statement from the Tao te Ching (which I think of as the earliest cognitive therapy) is "To be given everything, you must give everything up." I believe this statement is indicating the difference between a "fixed desire" and a desire. A fixed desire is a demand or a "should" about our behavior or the world around us. "I should enjoy time with my children rather than being distracted." Fixed desires almost always lead to unhappiness or dissatisfaction because there is an implied demand of "In order for me to happy or okay or good, I should..." But the demand is so unreasonable that it can't be met. Look at the one I wrote above. If a person is thinking "I should enjoy time with my children rather than being distracted" while with his or her children, he or she is being distracted by the demanding thought itself! The pursuer of excellence may have desires such as "I want to be more mentally present when I'm with my children" but these desires are not demands but are achievable goals.

10) Enjoyment vs. Dissatisfaction. Finally, the pursuer of excellence finds enjoyment and satisfaction in the pursuit of goals whereas the perfectionist is usually unhappy or dissatisfied. When goals or risks are challenging and achievable and are not attached to the self-concept they can be fun to pursue. As a result, the pursuer of excellence is often more successful that the perfectionist because he or she is not paralyzed with fear of failure but is able to enjoy the process, and therefore, pursue more risks and goals increasing the chances of success.

Copyright © 2010 by Excel At Life, LLC.
Permission to reprint this article for non-commercial use is granted if it includes this entire copyright and an active link.

All comments and questions require approval so you may not see your submission immediately.