"Take a moment and write down or reflect upon all the thoughts that come to mind when you think about dieting or losing weight. Now note how many of those thoughts are negative. "
Tweet 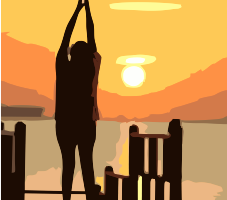 Audios to help you change your thinking about taking care of your body: Thinking Your Way to a Healthy Weight.

"I don't have any willpower."

Do these statements sound familiar? Too often, our self-statements about weight management interfere with our efforts and lead to failure. By changing how we think about developing a healthy weight we are able to change the behaviors that can lead to success.

Not long ago I conducted a little experiment with my cardio-kickboxing class. After an intense class I told them to get the heaviest weights they could curl 8-10 times. I spent a minute telling them to focus on feeling tired, that they had just worked out hard and they couldn't do anymore. Then, they were to curl the weights to exhaustion. Once they finished, I spent another minute telling them to focus on having energy, feeling good, feeling refreshed, and knowing they could do more. Once again, they lifted the weights to exhaustion. The results were that out of nine people, only one did fewer lifts the second time! And typically, when someone lifts weights to exhaustion they should not be able to lift as much the second time when it is only a minute later. Although this was not a controlled scientific experiment, it was a demonstration to my class to show how powerful our thinking can be. What this exercise showed was how positive thinking overcame the natural exhaustion of the body and created a self-fulfilling prophecy of lifting more weight because the participants believed that they could.

How does this demonstration apply to achieving a healthy weight? Take a moment and write down or upon all the thoughts that come to mind when you think about dieting or losing weight. Now note how many of those thoughts are negative. Several typical categories of thinking emerge when people record their thoughts about dieting. These include perfectionistic thinking, negative evaluation and labeling, generalization, and focus on failure. By recognizing and changing these thought patterns you could be on your way to achieving and maintaining a healthy weight.

One of the most prevalent thought patterns about weight in our society is an over-emphasis on perfection. We are confronted repeatedly with the focus on beauty and thinness. Commercials, television shows, movies all have a preponderance of attractive people seeming to indicate such beauty is the norm. For instance, watch a TV show set on a beach in Florida and then go to the beach yourself. Do the people look the same? When I go to the beach I see people of all body types and sizes but on most television shows that is not what they show unless it is part of the story line. Especially notice how beautiful the women are on national television news shows these days; although the news has always emphasized attractiveness of the female anchor, it seems that they are now required to be a model first. So, all around us we are presented these images as if this is how we should look.

No wonder we develop unrealistic expectations about our appearance. The problem with these perfectionistic expectations is that they are likely to sabotage any efforts we make towards maintaining a healthy weight. When demands are difficult or impossible to meet, we tend to take a defeatist attitude and quit. “I can't look like that anyway, so why even try?”

In addition, perfectionism tends to be all-or-nothing so that if we evaluate our success according to whether we achieved the perfectionistic goal or not rather than evaluating success upon improvement. For instance, I knew a women who had successfully lost 85 pounds but because she didn't achieve her goal weight by the date she had set for herself she became discouraged and, quit dieting, and put half of the weight back on. Too often, when people want to lose weight they set extreme calorie limits and exercise goals that they are unlikely to meet. As soon as they fail one day, they give up.

However, if we can focus on making small improvements that are realistic and manageable we are more likely to be successful. Also, we need to set goals that are not so concrete. Instead of “I will exercise for an hour everyday” we can state “I will increase my activity level.” Instead of “I won't eat any sweets” we can set a goal of “I will thoroughly enjoy any treat I eat and not eat snacks mindlessly.” Instead of “I will restrict my calories to 1200 a day” we can decide to write down whatever we eat so as to be more aware of food intake.

Frequently, people tend to overly focus on the negative when trying to change a behavior. We learn these attitudes from the messages around us and then they influence our behavior. For instance, at one time I used to believe the societal attitude of “I'm weak and unmotivated” because I was obese. As a result, I never set any realistic goals for myself regarding weight because I knew I would fail because I didn't have what it takes. Well, what I didn't have was a healthy belief system about myself and my weight problem. One day, however, I thought about that statement: “I'm weak and unmotivated.” As I thought about it, I began to realize how inaccurate it was. Other evidence in my life clearly indicated that I was motivated: I obtained a Ph.D., I had conducted and published research, I developed and ran a successful business, I was involved with my son's school and other interests. These certainly weren't indicators of an unmotivated person. I also realized I wasn't weak: I had confronted numerous personal stressors in my life and didn't back away from problems. So, based on this self-assessment, I changed my thinking to “I have a problem with weight control.” This thinking was not so global and overwhelming. It did not make me feel bad about myself generally because it was more specific and confined. Therefore, I was able to think of becoming more healthy in a manageable way rather than being overwhelmed with all the negative emotions related to “I'm weak and unmotivated.”

Examine how you label and evaluate yourself by listing the thoughts you have about dieting, weight loss, or achieving a healthy weight. Then, ask yourself, “Are these accurate statements?” What evidence can you find from other areas of your life that show how these statements may be inaccurate? Then, determine what you can say to yourself instead that doesn't make you feel as bad. Finally, say it! As frequently as you can remind yourself of the accurate challenges: “No, I'm not weak and unmotivated, weight loss is a difficult challenge for me.”

Many years ago when I taught a smoking cessation class, we explained to the students “There is no failure as long as you keep trying. The more times you attempt to quit, the more likely you will quit.” Too often, when people think about losing a weight they think, “I've tried before. It's never worked. It won't work this time. So, why bother trying?” And certainly, it probably won't work this time if we continue to generalize from past experiences. However, just because something hasn't worked in the past, doesn't mean nothing will ever work. Thomas Edison stated when working on his invention of the light bulb “I have not failed. I just found 10,000 ways that won't work.”

If you have found ways that won't work, that doesn't mean that you will fail in the future. Try something else. Determine why something didn't work for you and change it. If your goal was too demanding, make it more realistic. If you can't give up chocolate, how do you fit it into your diet? If exercise is boring, how can you be more active in a fun way?

Although this concept is closely related to the perfectionistic thinking and the negative evaluation and labeling, it deserves a comment separately. In particular, people tend to focus on the outcome rather than on the process which allows a greater focus on failure. For instance, if you are trying to lose weight, a focus on the outcome is based on how much you gained or lost in a particular week. If you gained or the loss was not enough, you feel like you failed. “I wanted to lose a pound, but I only lost a half pound.” However, the focus on the process allows you to examine more of what you achieved: “I have been eating healthier foods this week and not over-doing the snacks.” This type of thinking is more likely to lead to continued effort as opposed to the focus on failure.

The key to changing thinking is to first be aware of your thinking. A useful technique is to write down the thoughts that you have regarding your weight and attempts to manage it. Then determine what type of thinking error may be involved: perfectionistic thinking, negative evaluation and labeling, generalization, or focus on failure. Once you have determined the type of thinking, you can then develop an evidence list that shows the inaccuracy of the thinking. This allows you to develop a rational challenge to the thoughts that you can use whenever they occur.

By working on challenging your thinking you are likely to remove some of the roadblocks that interfere with achieving and maintaining a healthy weight. So much of our ability to achieve any goal starts with how we think of ourselves and our ability to succeed.


Copyright © 2010 by Excel At Life, LLC.
Permission to reprint this article for non-commercial use is granted if it includes this entire copyright and an active link.

Analyzing Your Moods, Symptoms, and Events with Excel At Life's Mood Log